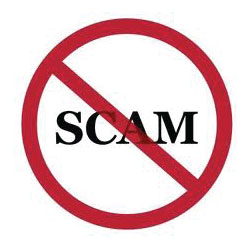 Virus phone scams are being run from call centres in India. The scam always starts the same way: the phone rings at someone’s home, and the caller – usually with an Indian accent – asks for the householder, quoting their name and address before saying “I’m calling from Microsoft. We’ve had a report from your internet service provider of serious virus problems from your computer.”

Ominous forecasts are made that if the problem is not solved, the computer will become unusable. The puzzled owner is then directed to their computer, and asked to open a program called “Windows Event Viewer”. Its contents are, to the average user, worrying: they look like a long list of errors, some labelled “critical”. “Yes, that’s it,” says the caller. “Now let me guide you through the steps to fixing it.”

The computer owner is directed to a legitimate looking website and told to download a program that hands over remote control of the computer, and the caller “installs” various “fixes” for the problem. And then it’s time to pay a fee: £185 for a “subscription” to the “preventative service”. The only catch: there was never anything wrong with the computer, the caller is not working for Microsoft or the internet service provider, and the owner has given a complete stranger access to every piece of data on their machine. That means that the calls connect internationally, but cost the scammers almost nothing when anyone calls them. If the payment has been made on a debit card as many are there is no hope of reversing the payment.

A number of payment organisations used by the scammers have shut down their accounts. PayPal, the eBay-owned credit transfer company, has taken rapid action against scam sites which used them.Microsoft denies any connection with the companies that call people up oering these services. When contacted about the scams, Microsoft said it was “currently investigating a series of instances in which the business practices of an organisation within the Microsoft Partner Network that have given rise to signicant concerns from a number of sources. We take matters such as these extremely seriously and will take any action that is appropriate once our investigation is complete.”

In their latest statement: “We conrm that we have taken action to terminate our relationship with certain partners who are clearly misrepresenting their relationship with us and using our company name in order to facilitate their telephone scam operations.” The company has noticed the problem. “Microsoft does not make unsolicited phone calls to help you fix your computer,” it says on its website.

If you receive an unsolicited call from someone claiming to be from Microsoft Tech Support, hang up. They do not make these kinds of calls.