Are Windows now the innovators and Apple lagging behind? 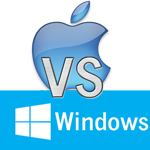 It’s a trend which has been gaining traction steadily for months, if not years, but now finally, people are beginning to ask, are Apple still the innovation leaders, or have Windows caught and surpassed them once again?

In the Apple heyday, at a time when the iPhone was the most dominant piece of hardware in the world, the iPad was revolutionising what to expect from tablets, and the Air versions of Apple’s laptops were pushing the boundaries of weights and thickness, it seemed Apple would never lose their ability to create astounding new technology.

However, in recent years this trend has seemed on the wane. iPhone updates come and go whilst everyone tuts and snipes at the minor differences. The Apple watch appeals to die-hards, but not seemingly to the worldwide mass market (as a drop in shipments of 72% suggests), and the Macbook and Macbook Pro hadn’t seen a refresh for over 1000 days until recently.

The world has been on tenterhooks for the latest Apple revolution for some period of time now, and it appears no closer to fruition than it ever has, and now people ask, ‘Have Apple lost it?’. Where is the next evolutionary leap? The next ‘must-have’? Is it even on the horizon?

Yet all is not lost, IF you aren’t precious about which side of the lifelong Apple / Windows debate you subscribe to. It seem, slowly at first but increasingly quickly, that not only have Windows begun to catch up with Apple in terms of revolutionising the way we use technology, in many ways they may have recently surpassed them.

Take the ‘Surface Studio’, Window’s latest touchscreen device, launched last week to wide acclaim. It had everything that used to define Apple launches; it looked great, came with a brand new means of controlling the screen, and an eye-watering price tag to match, yet it is simply the latest in a line of Windows devices which are winning back the casual customer.

Whilst Apple hit back in measured style, with a new line of Macbook Pros including a ‘touch bar’, somehow it felt underwhelming, and surely once that becomes the pervasive mood upon arrival of a new product, it can truly be said that Apple launches do not inspire us as they once did.

So the pressure grows on Apple’s Tim Cook, to produce a truly innovative and exciting product once again, and take back the initiative from Windows that was once a dream, but seems to have been snatched back in style. In the race for dominance in this market, the battle that once seemed conclusively won is back on. Let us hope both sides draw inspiration from the challenge!